skip to main | skip to sidebar

I’m back from my unplanned blogging hiatus with splendid news! I am now employed as a stuffie-maker! I’m still kind of in shock about the whole thing…here I am, chilling out at home, doing one of the things I most love to do, not wearing pants, and earning money while I’m at it! I’m super excited about making stuffies from this artist’s sketches. He seems to love stuffies as much as I do and has an eye for the strange but cute…exactly what I like!

So this week, I’ve been working on a little owlie for my job, and I’m pretty happy with him. I decided to employ some new techniques for little details that I hadn’t yet had an opportunity to try, and I think he’s definitely just well made if nothing else. I will show some peeks of him on here if I get permission first.

Other work has been letting up a little bit from the past month or so, but I’m finding myself with less free time than I have in the past. I attempt to make the most of what I’ve got, though, and OfficeBear and I are trying to make the most of the predictable and gentle rhythms of a typical day at the office. I’ve noticed my favorite times of day are the simplest: The quiet and thoughtful drive to work, dripping oatmeal on OfficeBear mid-morning, tea and snack time in the afternoon, a shower after I run. I can count on these happy moments daily; they are so satisfying to me. 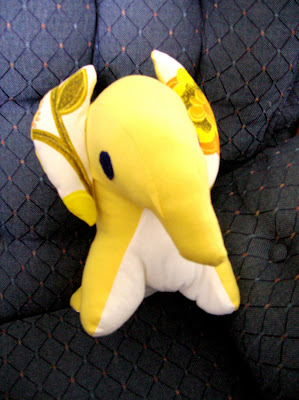 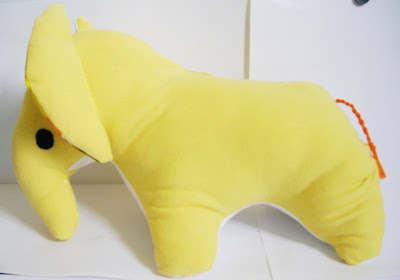 Yellie takes pride in bringing a bit of sunshine into the greyest of days. He is sleepy most of the time, but when he’s hungry, he’ll sniff around for a snack, tasting this and that and whatever comes his way.

I left Yellie to be my last in the menagerie as I could tell he would be challenging. He was, but not as much as I had originally thought. I built up my skills making all of the rest of my friends, and my new knowledge helped greatly in the construction of this pachyderm.

I began by sketching ideas of what the pattern pieces might look like and how I wanted the finished product to look and feel. Then I did my usual process of sketching the pieces on packing paper, cutting them out, and making revisions as I went. When choosing the fabric, I knew I wanted a cute bit of vintage accent fabric for the ears, so I went through my (not big enough yet) vintage scrap fabric stash and found an adorable yellow/orange/green/white 1960s print. The problem was I only had a very small square of it, but I figured I could eek out two ear-insides from that bit. To make the body, I found an old yellow t-shirt of Taty’s and a white t-shirt scrap from my stash for the belly.

I then cut the fabric into my pattern pieces, pinned them all together, and started sewing. I was surprised at how seemingly easy it was to sew everything and the flat version of Yellie looked great: 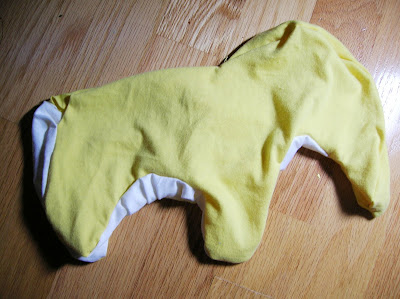 But I also knew that the only way to determine his real shape was to stuff him. The problem with more complicated patterns (like this one) is that there is more of a chance for warping or just general misshapenness. I was sort of doing this on the fly, just guessing at general shapes and sizes, so I figured I’d have to make some adjustments. Sure enough, when I stuffed him, I could tell his trunk was a little warped off to the side. This was because when I was pinning it, no matter how careful I was, I couldn’t get the pieces to match up exactly. But everything else turned out pretty well…a couple sewing mistakes here and there where my machine was being uncooperative, but overall, not bad for such a complicated project.

Once I put his ears and eyes on and he was all stuffed and squishy, I knew I had a cute one on my hands. His misshapen face has even grown on me; I think it gives him character…like a permanently quizzical look. My last task was to make his tail and sew up his butt. I realized that poor Yellie was having a difficult time standing on his legs because his head was pushed downward a little and he was resting on his trunk, so I pulled the fabric on his back and tucked it so that he would not be resting on his face. This didn’t create the cleanest line, but for the next one I make, I’ll know what pattern revisions to do to avoid that. Plus, who can resist a wrinkly elephant butt, right? 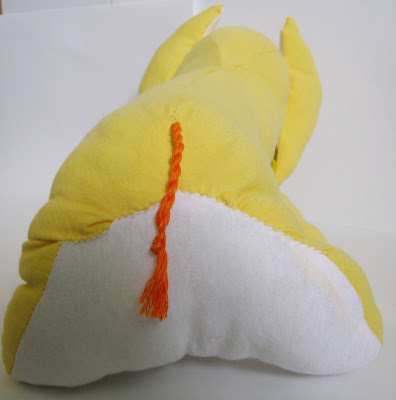 I found this great tutorial via CRAFT magazine on how to make twisted cord, so I had to try it with orange embroidery thread for his tail. Sure beats braiding!

Yellie is now a permanent fixture around these parts, napping in whatever cozy spot he can find in pillow-crevaces or comforter swirls. He is baby-soft and I under-stuffed him for super squishiness! He's also a great listener: 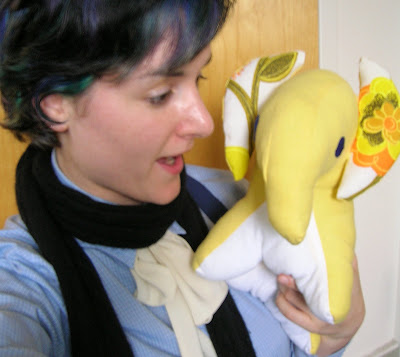 I hope you like him as much as I do!

Who makes this stuff?

k-k
A dreaming, musing, laughing, fighting, living, thriving being who enjoys (among many other things) making things, writing things, not wearing pants, and getting to know herself a little better each day.